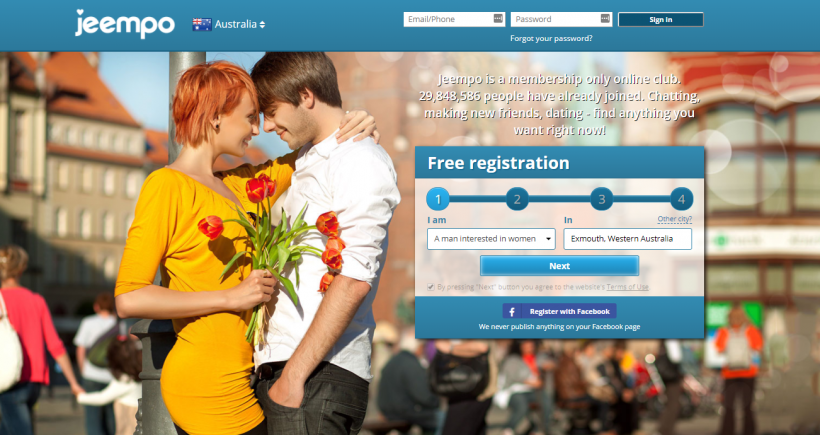 It’s not always easy to come to the true nature of a dating site. For example, Jeempo.com was really problematic because it looks very suspicious, but the “Terms and Conditions” don’t include the usual stuff that fraudulent dating sites usually include, such as fake profiles and commercial dating services. However, it seems very weird, it includes a provision for unlimited affiliates and other commercial contents so we don’t trust it at all.

Although there is no written proof in the regulations that Jeempo.com it’s a fake site, the unlimited amount of chat messages delivered to our inbox are a surefire sign that something stinks. Typically, when you don’t have a photo uploaded and even when you’ve only been on the site for a couple of minutes or more, you don’t expect a dozen of emails from women delivered straight to your inbox. Well, you will get at least 5 to 6 messages in the first 10 minutes of your membership on Jeempo.com.

Why does this happen? The reason is usually to lure you in into paid subscriptions. You can try and test this thinking by yourself but be wary! We’re almost 85% sure that this is a fake dating app.

Why Is Jeempo.com A Tricky Dating App

The most obvious reason that you won’t get laid on Jeempo.com is the regulation about selling varying commercial services. Usually, when we find this statement on a hookup site, it means that you will find paid cam rooms, mixed camgirl profiles along with the other profiles in the members’ area and adult movies. On top of that, you get all those annoying ads about ridiculous penis enlargement or pills that you don’t need, or other useless stuff that is only if a poor value for money. It provides nothing in return. You know the usual looks of a scam site. As a general standard, it’s full of advertising viruses and blackhat links that redirect you to other websites. Then they are trying to sell you something that you really don’t need targeting your weak points.

Cancelation of the Trial Version is Fake

You will get the membership subscription rates in clear. They are written in the “Terms and Conditions” section, so you know how much it will cost you to get the trial or subscribe to one of the longer memberships. There is a trick though and it’s not one that you notice immediately. When you subscribe to the one-day trial it immediately renews to the monthly subscription. The point is that if you want to cancel the monthly subscription you need to do so 24 hours in advance. Basically, there is no way that you can cancel the one-month subscription! You’re being charged in any case. In a nutshell, there is no trial version on Jeempo.com. It’s just a disguise for the full monthly payment.

The most surreal-looking future is the front page and the members’ area with all those sexy girls. There are never that many hot girls on typical dating sites. Usually, they’re full of men and they even include some weird photos of male bodies (not the ones you’d like to see, except in nightmares). If you throw a glance on those that make it real, the people look way more realistic than on scam dating websites.  A flurry of top beauties is a big red sign of a fake website!

Unfortunately, we don’t have a 100% way to prove that Jeempo.com uses fake girls and that they are a totally fraudulent website. However, many signs indicate that they couldn’t be trusted. For example, the tricky trial version is a suspicious factor, the numerous affiliate websites and commercial partners follow as second. That’s enough for the team of Adult Dating Patrol to take it with a grain of salt and put it in the fake reviewed sites and apps’ lists.